****Disclaimer: I’m on drugs and also a fall risk. (Just throwing that out there before you read any further.)****

Wait.I don’t need an intervention. I’m just on pain meds because I had surgery yesterday. 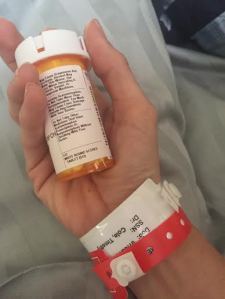 Do you feel sorry for me? Good. I need some pity. You’ll see why later. Keep reading. By the way, I’m in a lot of pain. I’m in more pain than I thought. Are you ordering me flowers? Don’t. Flowers die, and you don’t have my address, so you would probably send flowers to some other Mandi who would be like “Hey, why did I get flowers?” And then they would die. I’m digressing.

I guess I should tell you why I had surgery. No, I didn’t get boobs. I already have those. I said boobs. I really am on drugs. What was I saying? BOOBS!

Oh, yeah, why I had surgery. I’m kind of a gym rat, and by kind of, I am one. I exercise a lot. I usually play a little basketball with a friend and then we go to this class. The instructor calls it Pilates until you come to class, and then she says, “If you’re expecting traditional Pilates, you’re in for a treat.” She’s lying. It should probably be called “You’re about to get your ass, abs, arms and legs handed to you, and don’t even think about taking a break or stopping for a drink because I will yell at you, and I know your name!” But that’s too long to fit on the little calendar, so Pilates it is.

I’m a little competitive, so since I’ve been going to this class three times a week for over two years, I’ve made some friends in the class, and we started a competition. Who can out pilate the other. I like to win. Well, a week ago, I was in class and trying to win, but I kept having to take breaks, which is not my norm. I was dizzy and very nauseous. So much so that even the instructor came over to me and asked if I was okay. I muscled through (see what I did there?) and finished the class, but I could tell something wasn’t quite right.

Throughout the weekend, I felt worse and worse. I pushed through because someone very special had a very fun book release party, and I could not miss it, so I drank some wine and champagne and ignored the pain in my stomach. 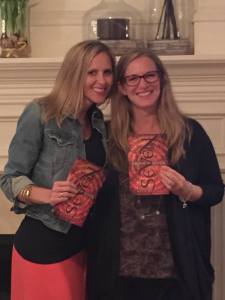 Sunday night after a busy day of family and Easter egg hunts and eating my weight in chocolate, I had to lie down, which is also not my norm. What’s a nap? I decided I should call my doctor. Monday morning, she confirmed I had a hernia and referred me to a general surgeon. I met with him on Wednesday. He looked at me for two minutes and said, “That’s gotta come out,” so I had surgery yesterday. No big deal.

Here’s where you come in. See, no flowers, I need something else. Do you l love me? How much do you love me? I love you. A lot. I would send you flowers and tell you how much in the card, but those cards are really small, and flowers die. I only like moist tulips anyway.

What was I saying?

Oh yeah!!  I’m about to release my VERY FIRST NOVEL, and I am so excited. I would jump up and down and do cartwheels, but I have stitches, so I can’t. I’m reaching out to you, my people.

Here’s a little bit about the book:

Paige Preston wants to end her life. After an unsuccessful attempt, she lands herself in mandatory therapy with a sexy psychiatrist. When he and an even more alluring friend begin to help her break down the walls she’s spent a lifetime building, Paige begins to see something bigger than herself. Is it enough to pull her out of her dark world and help her finally feel like a human? Or will letting someone in be the final step toward her demise?

Dear Stephanie is a sinfully addictive walk through a world of beauty, affluence, and incidental love that effortlessly moves the reader between laughter, tears, heartache, and hope with the turn of every “Paige.”

I’m about to be in your face with everything Dear Stephanie (that’s the name of the book, by the way). I would love some internet love. I need volunteers to read and publish a review on release day. I need tweeters to tweet my stuff or even retweet. Help me pimp.

If you want to have me, I would love to come play on your blogs and talk about the book and the characters. But anything you are able to do, even if it’s just to tell me not to freak out, I need, and I will be eternally grateful forever and ever. Isn’t that what eternally means?

So who’s in? Remember up there when you felt sorry for me? Use that. Help you help me. Wait. See? I’m on drugs.

Here’s a link to my new author Facebook page:  https://www.facebook.com/authormandicastle

It’s pretty empty, but get ready for some exciting teasers and giveaways and all those things I’m supposed to do that I don’t remember right now.

***I have no idea what I just wrote, and now I’m seeing double, so I apologize for errors and other things. I didn’t edit this.***