That phone call set my heart to flight.  Brandon, who I had a huge high school girl crush on, just called me at my mom’s house and asked me on a date.   It was Friday.  He suggested that we go to dinner on Saturday night, but I had to waitress at the piano bar, so I begrudgingly said “no.”  He thought for a second and then told me that he already had plans that night with some friends to meet at Blues, the bar next to the hospital.  He invited me to join them.  He didn’t know my age. Eighteen. He offered to pick me up, but I told him I would meet him there.  I was nervous and socially awkward, and I wanted my own car in case I needed to bolt if my anxiety got out of hand.

I drove to my apartment giddy with excitement about our impending date.  I appealed to my best friend/roommate to find me the perfect outfit since I had/have zero fashion sense, and Brandon had never seen me in anything but my hospital uniform:  Green polo shirt and khaki Dickies.  She found something she said was perfect “first date at a bar” attire that most definitely would make him swoon.  I looked at the outfit, bit my lip, and shrugged my shoulders.  I had only been on a few dates and had very little experience with men, and Brandon was a man.  A beautiful Latin man.  So I took her advice and donned something other than my usual t-shirt, jeans, and sneakers.

I walked into the bar feeling out of place without my normal gang of hospital friends, tugging at my shorts that I was certain were at least 2 inches too short and pulling at the shirt that hugged me a little too tightly.  Then I saw him.   He was sitting at the bar, drinking a Bud Light wearing a white Nike baseball cap, a perfect contrast to his tawny skin.  He turned around and noticed me standing in the doorway.  His smile reached all the way to his dark eyes as he walked over to greet me.  He pulled me into his chest in a surprisingly comfortable hug.  “Wow.  You’re here,” he said offering me that killer smile.  “I wasn’t sure you’d come.”  What?  He wasn’t sure I would come.

He guided me to the bar, his hand barely grazing my lower back.  He ordered me a Bud Light and another for himself, and we sat side by side sharing familiar and easy conversation.   We talked about college and classes.  He told me he was 23 and almost finished.  I hesitated but told him I was only 18, that I had just completed my second semester.  He looked at me and said, “You’re just a puppy, Kiddo.”   “Kiddo” would become his pet name for me, a name that I would grow to love being called.

He introduced me to his friends and his brother who met up with us later, and we all talked and laughed, and I found myself floating in his attention.  He was smart and funny and unbelievably sexy.  We closed down the bar.  He insisted that I let him drive me home…in his jeep…with the top off, which took his hotness D&B to a whole new level.  On the drive home, we learned that we shared a passion for music of all kinds.  When we got to my apartment, we sat in his jeep in the parking lot, listening to Fleetwood Mac.  When the last song ended, I reluctantly said, “I better go in.”  He walked me to my door where he planted a soft, sweet kiss on my lips and said, “Goodnight, Kiddo.” He pulled me into him in a warm embrace and let out a quiet sigh that went straight to my…ahem.   I wanted to invite him in, but I didn’t know how.  I was young and dumb, and incredibly naïve.   I opened the door and walked into my apartment, trying to summon the words to tell him that I didn’t want the night to end, but the words never came.  Instead, I just said, “Goodnight.”  He winked and turned to walk to his jeep.   I went to bed smiling, with his scent still lingering on my skin.

The next morning, my roommate drove me to my car.  I started to pull out of the parking spot when I noticed something on my windshield.  A note.  From him.

Can’t wait to see you again. –B

Just like that, he hooked me even more, and I was in my first “grown up” relationship.  We took advantage of every free opportunity we had to spend together. It was challenging since I worked most nights, but we made it work.  We didn’t see each other often, but when we did, we cherished the time.  We shared a twisted sense of humor and spent most of our time together laughing.  He had the best laugh, and anytime I said something funny, he would grab me either by my arm or my hand, and hold me while he shook with laughter at something witty that I said.

His touch ignited my skin.

He took me to his childhood home, introduced me to his mom, and called me his “girlfriend.”   She made us jalapeno muffins and told Brandon to be nice to me when he made fun of something that I said.   After she went to bed, we cuddled on the couch and watched some old movies on her big screen TV.

Another night, he took me to an abandoned mansion rumored to be haunted.  We crawled through the window and crept through the dark empty rooms, waiting for a ghost to jump out at us, my heart pounding in my chest.  But nothing made my heart stutter more than when he pushed me up against the grimy wall, wrapped his arms around my waist, and kissed me.

We spent countless hours at our favorite music store, standing side by side at the listening stations, ears covered with huge plastic headphones, smiles plastered on our lips discovering new music together…all before iTunes and immediate internet downloads.   Our love of music became our bond, another pull to my heart.

He often surprised me and showed up at the piano bar to listen to me play, which was a huge adjustment for me since I preferred to play for strangers.  That first night, he sat at a table by himself.  He didn’t order anything to eat or drink,  just sat there.  Listening to me.  I forced myself not to look in his direction.   I didn’t even notice that he left before I finished.  I was hugely disappointed when I discovered his empty chair until realized later as I counted my tips that he snuck  a comment card in my tip jar that said:

I didn’t think it was possible for you to be more beautiful, until I heard you play. ~B

That night, when I left the bar, he was waiting by my car.

“I got you this,” he said and handed me a CD.  George Winston:  December.  “It’s really a Christmas album, but I think you’ll like it.”

I suggested that we hop in his jeep and go for a drive to listen to it.  As we drove through our West Texas town, the sound of George Winston’s piano mingled with the warm summer breeze.  Then I heard a familiar song, Variations of Johann Pachelbel’s Canon.  He said that he loved this version and that it was his favorite song to hear on the piano.  We drove for hours that night until he took me back to my car.  He gave me a simple kiss, and said, “Goodnight, Kiddo,” handing me the CD.

I drove home listening to my new album and made it my mission to learn his song.   I listened to it incessantly, always playing it in my head.  I spent hours at my parents’ house practicing it over and over.  When they went to bed, I went to the one place that I knew never closed, the hospital chapel, and I banged my way through it until it was…perfect.

The next time he came to listen to me play, I surprised him and played it for him.

That night, I didn’t have to invite him into my apartment.  He practically pushed me through the door. 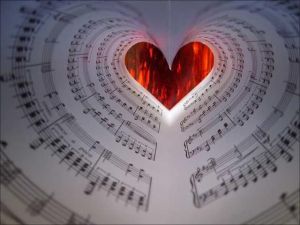