Occasionally, someone strolls into my life and just fits right in and becomes an instant friend. Today I get to introduce you to one of those people. Briton of Punk Rock Papa is one of the kindest bloggers on the internet. He is always quick to help out if you need something or to just send a “how’s it going?” message. He makes me laugh, and hearing him talk about his wife,  his twin toddlers, and brand new baby boy warms my heart.  Please give a warm welcome to my new friend, Briton.

What an honor to be here!

After talking to Mandi, I ran out and bought some shoes to dance and groove in. Then I realized, I can’t dance!

Much to the dismay of probably every follower of Mandi’s, I am not the cool gay Briton she danced with in Kansas City.

My insecurity is rising and anxiety from being in over my head is swelling to a burst of full-blown panic attack.

I must find something interesting to share with the one or two people who haven’t yet exited the screen when they realized I am not Gay Briton from Kansas City.

When my wife and I found out we were having twins, I almost fainted. Tunnel vision set in. My life flashed before my eyes. There was no way I could handle two babies at once!

Eight months and a scary emergency C-section later, there I was! Holding two of the most handsome babies to ever grace the world with their beauty and life. (I’m allowed to be biased; I made these little guys with my skilled unprotected coitus). I assume parents everywhere know that feeling when they first hold their offspring – the swell of happiness and love that fills your chest. It’s a really spiritual moment, even for those not spiritually inclined. You feel the bond, like an invisible umbilical cord, between you and the child.

I didn’t sleep for a month after my kids were born. Absolutely terrified of SIDS, I would get out of bed intermittently and jab my kids in the stomach with a finger to make sure they were still alive. If I was working, the wife would get a “poke the babies” text.

Flash forward six more months. (We are at around seventh months of life for those not very good with counting)

Here we came around the corner at the doctor’s office. Dad and kids. It should be noted that I was *carrying* the kids by the front of their winter bear suits. Here we come, Papa Bear and his Cubs, arms and legs wildly dangling.

The look on the face of the nurse at the pediatricians office said everything.

Shock quickly turned to laughter. The kids and I are rather popular at the doctor’s office. We laugh and joke and hate the nurses who give shots. Usually when we’re called in, I’ve got one kid tucked under my arm, newspaper-style, and I’m dangling the other one upside down.

Why do you care, why does this story matter?

After finding out we were expecting twins, the first place we visited was the bookstore. From What To Expect When You’re Expecting to Twins, Multiples, we got All The Books!  Even found some dad books for me to read!

And read, I did

By the end of the first book I had to check and make sure the author wasn’t Stephen King.

The second book had me calling a doctor asking for a prescription to quell my parent anxiety attacks.

The first month of parenting I leaned on these terrifying books. They are the cousins to the whole “if you have unprotected sex you will get an STD and die!” style of teaching. Their motto is, “If you don’t do this, your child will die of SIDS!”

After the first month, I was ready to purchase bubble boy suits for the kids.

I can’t remember the exact moment I realized I had been worked up into a frenzy. I just remember it happened after about a month of sleep deprivation and being alert to every possible sign of baby sleep apnea. I had to dial back. I couldn’t live in fear that my Nemos might run into something bad at the drop off.

Flash forward! (Hop in my DeLorean. We are going Back to the Future!)

My kids are almost two. We have a blast. All my friends have largely fallen off the radar, so my kids take up that space and time. From wrestling to running around, I simply love fatherhood. Even snuggling up and watching Kipper the Dog is time well spent. I still poke my kids occasionally to make sure they’re breathing, but I don’t have nearly as many heart attacks as I used to.

And the best part?

Yes, this has all been a big build up so I could follow up on Mandi’s awesome dance post with ANOTHER post about dancing. We have the most fun kitchen dance parties! Nothing like two toddlers and a dorky dad moving and grooving during lunch time. So, on a late night in Kansas City you might be able to catch a ride to dance at the gay bar with Briton. You can also, if you’re inclined to do so, come catch an afternoon kitchen dance party in New London.

Either way, life should be fun! Whatever you’re doing – from dancing late into the night, to shimmying around a kitchen with toddlers, live in the moment  – and enjoy it. 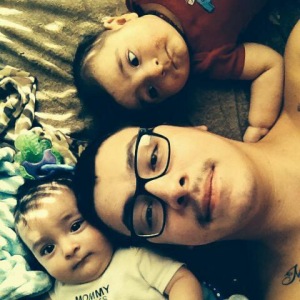 26 thoughts on “Could I Have This Dance”