“Mo-om!” My three year old daughter called from the bathroom. I slowly shuffled to where she was brewing with excitement with what awaited me. I helped her get herself in order. Then I washed my hands, dried them, and started heading out into the small hallway by my bedroom. Out of the corner of my eye, I noticed movement in my bedroom. I quickly completed a status check in my head. It took me about half a second to realize son and dog upstairs, husband in his office, daughter and I in the doorway of the downstairs bathroom, but something moved in my bedroom.

I turned my head quickly and held my hand flat against my daughter’s chest to keep her in the bathroom. Just then, I saw a tail. A long black tail. I may have squealed like a little girl, or maybe it was my daughter, but I stood still in the doorway of the little bathroom daring not to venture into my room and discover what body belonged to that tail.

Still nothing from my husband. Meanwhile, I looked down at my daughter to find her shorts still hugging her ankles. I leaned over and pulled up her shorts, and it moved again, only this time it darted across my off white carpet. A black body slivering against my floor.

“J!” I shouted to my husband who still had yet to come out of his office and investigate what sort of intruder had taken residence in my bedroom. His lack of concern was an issue. “Aren’t you a man?” I yelled again. I heard the creak of his chair and then I saw the entire body of the beast.

“It’s a lizard,” I yelled, still perched in place.

“I don’t do lizards,” he calmly said to my back.

“Dude,” he said again calmly, “What are you going to do?”

“What am I going to do? There’s a giant lizard in my bedroom, and you have a penis. What are you going to do?”

“Dude, I don’t do lizards,” he said with his hands up in surrender and started backing toward his office.

Just then, I saw the lizard dart across my room again and head under my dresser. I screamed. I can’t lie. I squealed again, which made my daughter squeal. Clearly, I was going to have to take action against this reptile.

“Get me something,” I said to my wife.

“What?” My wife responded.

“Why aren’t you going to kill it?” He asked.

“Because he’s as scared as you are. I’m going to put him outside, but first I need you to get me something so that I can keep my eye on him before he hides under our bed and jumps into your mouth tonight to shut you up when you snore.”

He, my wife, headed to the kitchen.

I slowly crept into my room and got down on my hands and knees to see if I could see him under my dresser.

“Here,” Wifey said, but not with his usual calm, which made me scream again thus making the lizard take flight from beneath my dresser toward my face. I jumped to my feet and watched the well fed lizard run across my room toward my chair that sits in the corner. Perfect, I thought. I can corner him and then trap him so that I can release him into the wild where he can feast on all the bugs his giant gluttonous lizard heart desires.

I looked to the floor where my wife had set this:

By this time, my daughter had taken cover from the lizard upstairs with her brother, so I no longer had to hold my tongue.

“What the ever loving f*ck do you want me to do with that?”

“You said you wanted to trap it.”

“With my good glass bowl? Please get me something useful.”

I listened to my wife shuffling around in the kitchen as I watched the lizard from behind the protection of my bed. I slowly climbed up onto my bed and stared down at my nemesis. I swear I think he smiled at me and for a moment, I was the lizard whisperer until I realized why he was smiling. The next second, he hiked his little lizard leg up and shat on my floor. 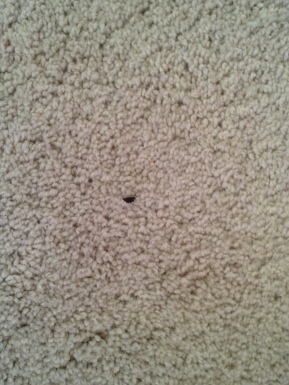 I didn’t realize my husband, I mean my wife had returned to the room by this time. I yelled to the lizard, “Stop doing that.”

Then I heard a little girl scream and felt my bed shift. I looked over to see my husband, seeking protection from a lizard behind his 5’3″ 120ish pound wife. He’s 6’4″ and 200+ pounds of vagina.

His scream startled the lizard, making him  jump from his shatting and start up the wall. At this point, I decided I was going to have to grow my balls and just use my hands to catch the lizard. I crept to him, stealth like as he climbed,  light on this feet after taking a massive shit on my floor, up my bedroom wall. Then I clamped my fingers down on his fat little belly and ran out to my front yard. I may or not have screamed something explicit the entire way that starts with F. I threw him down into my flower garden and watched as he ran for shelter under some bushes.

Then I went inside and found my daughter and told her to go ask dad if he wanted to borrow her pink panties.

Some days, I’m really glad that I grew up with four brothers because I’m pretty sure I married the sister I never had.

Disclaimer: During my mad lizard hunt, I did not think to reach for my iPhone to capture a picture of said Salamander. You’ll just have to take my word on this. He was a big bastard.